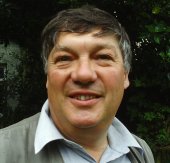 David Wishart is a cooking enthusiast. Dried herbs are strung across the ceiling of a kitchen bursting with pots and pans and other cooking paraphernalia. As we sit down to a delicious meal of homemade fish soup and pizza, he tells me enthusiastically about his pasta making machine and tarte flambée board. When he is not writing or experimenting in the kitchen, he is out on long walks with his two dogs, a pastime that gets his creative juices flowing. Aside from cleaning, which we both agree is a waste of time, the one thing you won’t find him doing is promoting his novels. “It’s something I’m ashamed of, but I don’t like networking or marketing. I’m not an author, I’m a writer. A writer just writes.”

After graduating from university with a degree in Classics, Wishart spent several years abroad teaching English, a role he describes as “the best job in the world if you like travelling.” It was while he was living in Greece that a strange dream inspired him to write his first novel, a mad sci-fi adventure where a six foot high table lamp, a giant bottle of aspirins and a teenage girl go in search of a powerful energy transformer masquerading as a pomegranate. “It’s off the wall and it’s fun,” he says. “I thought that I was a children’s writer and I would write science fiction or fantasy.”

His first published novel, however, was an entirely different beast. The inspiration for I, Virgil, a fictional autobiography of the Roman poet, came from an essay he had written as a student at the University of Edinburgh. “It wasn’t a crime book but it did have an historical puzzle and that’s what interested me.”

Wishart began to seek out other historical puzzles that would make interesting novel plots and the next one he came up with was “Why was the Roman poet Ovid sent to the Black Sea and never allowed back?” His novel Ovid was the first to feature Marcus Corvinus, the Roman nobleman sleuth who would go on to star in a whole series of historical crime novels.

“Corvinus started out as a real surprise to me. I had a sort of character in mind – middle aged, certainly, and very straight down the line – but I couldn’t get him to come alive.” Wishart spent three days in front of the computer unable to write until one day, while slumped in his chair in a dressing gown with a glass of wine in his hand, the character suddenly started talking to him.  “He wasn’t the person I had thought he was at all. He was 19 for a start, and he was this total immature, yuppie, spoiled brat. It was so surprising but he was absolutely right and I was chuckling. And after that the book wrote itself.”

The books in the Marcus Corvinus series are humorous, with the characters speaking in modern dialogue. The complex plots can generally be divided into two categories: political mysteries and whodunits. In both cases, Wishart likes to base the story around a documented historical event, using the facts to come up with a new, fictional solution. “It’s a bit like doing The Times crossword: you’ve got to produce an answer that covers all the bases. In crime novels you can’t finish up with the accepted explanation, otherwise it’s just an historical novel.”

Wishart works out the solutions to the historical mysteries he is writing about in much the same way Corvinus does. “I’ve got a list of characters and I imagine how and why each one could have done it.” Wishart, and correspondingly Corvinus, work through the list of key players, formulating theories and eliminating suspects as new information comes to light. “It’s almost like a checklist. At some point you’ve got to put a cross.”

Corvinus is kept on track during his investigations by his sharp-as-a-tack wife, Perilla. “He’s very clever but his enthusiasm and cleverness carry him away beyond the point where he thinks. He’s impulsive. Perilla is a lot more logical. She’ll be looking for flaws and problems. I can let Corvinus take the reader down the hypothetical path and then let Perilla stop that and take them back to reality. At end of the day it’s got to make sense. Perilla is a brake on fanciful plotting. She keeps me, not just Corvinus, on the right line.”

By unravelling the mystery in this way, Wishart ensures that the reader and Corvinus are always at the same level. He confesses to hating crime novels where the writer is purposefully withholding clues from the reader. “That’s why I like writing in first person: you get to assume the reader is fully apprised of what the character is thinking.”

One aspect of first person narrative that sometimes causes difficulty is that the reader must be able to empathise with the character. “Some aspects of Roman life would be completely alien to us and would break the empathy. For example, the real Marcus Corvinus wouldn’t have had an issue with slavery at all. Slaves were ranked below domestic animals. They weren’t people.” In the novels Wishart sometimes has to “blur over reality” so that modern day readers can identify with the characters.  The fictional Marcus Corvinus has developed a camaraderie with his slaves, putting up with his temperamental cook’s mood swings and concocting plans with his wife to help his major domo get a girlfriend.

On the whole, Wishart likes to portray Roman life as accurately as possible. He admits to already having a comprehensive knowledge of Roman history thanks to his Classics degree. He supplements this by further reading into the background of each novel. “The most useful source of research has been the 19th century Smith’s Dictionary of Antiquities, two solid volumes of everything you ever wanted to know about Roman and Greek background.” He researches his topic thoroughly before starting to write. He stresses that “you have got to let the character tell the story” and for that reason he has to know everything he can about the background history so that the character doesn’t “walk in a direction you don’t know about.” He likens his theory to seaside binoculars: “you can turn them any way you like but when the money runs out the shutter comes down and you’re blind. If you think your character is going to turn right because you’ve researched that area and he turns left instead, it’s like the shutter coming down.”

He warns against letting the extent of your research show in the writing. “I find that very annoying because it breaks flow of plot. Research is a bit like an iceberg. One tenth of it appears in the book but the other nine tenths aren’t lost, they give the one tenth stability. The reader should think that if they got the author into a corner and said ‘tell us a bit more about this,’ the author could do it. It gives you street cred as an author.”

As well as schooling himself on the historical background, Wishart studies maps of Rome for place names and geography. Surprisingly, he did not actually visit Rome until after he had published several books in the Corvinus series. “Until comparatively recently my only source for the topography of Rome was an early 19th century classical atlas.” Although he planned several trips to Rome, he was always thwarted at the last minute by a series of disasters, from sinking ferries to outbreaks of farming diseases.  His sixth attempt to reach the city was successful but, “two days before we left the pope died. I feel personally responsible for that.”

While in Rome, he felt more connected to his characters, noting that they seemed to “come alive”. He describes an instance where “Corvinus almost took over.” While travelling on the underground with his wife, he noticed someone trying to pick his pocket. “I got him by the throat and I wasn’t letting go. The door opened and he kicked me and took off. I took off after him, grabbed him and I literally lifted him off his feet and slammed him against the wall.  He thrust this bag at me. He didn’t get anything and we won, but it wasn’t me, it was Corvinus.”

Having a strong relationship with your characters is, according to Wishart, the main advantage of writing a series of novels. “They’re all friends. You don’t have to get to know them as you would new characters. You’re straight in there and you can watch them develop. At the beginning, Corvinus had only his own opinion and that was it. Now he can see other people’s points of view, which is good.”

After fifteen years and as many books with Hodder & Stoughton, Wishart has moved to a small print-on-demand publisher with the latest novel in the Corvinus series, Bodies Politic. Being a “small fish” at Hodder, there was little money for marketing his books and he describes his frustration at seeing them disappear into a “publishing black hole”. He is much happier now that he is with PlashMill Press, who have recently launched a blog dedicated to promoting their authors and showcasing their work. Visit the blog now to find out more about Bodies Politic and to order a copy.

7 thoughts on “Interview with David Wishart”